​Docta Reacta:  Today I would like to provide some elucidation and enlightenment on iron core reactors when they are used in harmonic filter banks! When OEM’s are looking for high reliability filter bank reactors, it comes down to a simple choice: Power Magnetics. Why? Because we have a very long history of providing iron core reactors, sometimes called harmonic filter reactors, to the manufacturers of harmonic filter banks that go into some of the most difficult applications imaginable.
Power Magnetics, Inc. has been an early leader building iron core filter reactors for 20+ years, building the most reliable reactors in the industry.  When reliability of the reactors in the most demanding applications is a primary consideration, OEM’s choose Power Magnetics.  Power Magnetics’ reactors are in the remotest and harshest regions of the world – polar, desert and extreme altitude (15,000 ft.) installations where a reactor failure is not an option.
Iron core filter reactors can be designed and manufactured as single phase or three reactors.  They are tuned to the specific harmonic spectrum required for the application, typically the 5th harmonic at 270 hertz.  Frequently, the harmonic spectrum involves as many as four frequencies, in that case, 3rd, 5th, 7th and 11th harmonic.  However, depending on the application, where complex impedance profiles or systems with large harmonic producing devices are used, the reactors can be tuned to a set of frequencies between the 2nd and 25th harmonic. 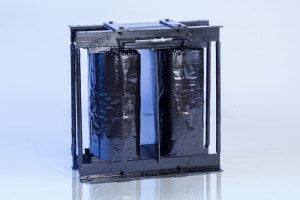 Iron core reactors fall into two broad construction types: grounded core and floating core.  In a floating core reactor the developed voltages are minimized making the operating voltage very low.
I have more for the next lesson, so stay tuned! Dr. Transformer, there you are!  How about some medium voltage juice to get you revved up today?  You don’t so energetic…….